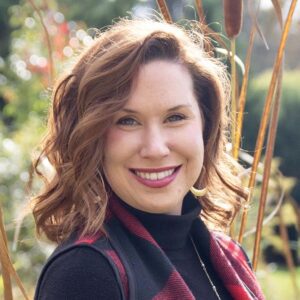 Kelly is a lifelong theatrical participant in a wide variety of areas. She grew up performing in various area productions, as well as studying and teaching dance.

In the fall of 2002, Kelly entered the Top 10 nationally recognized musical theater program at Point Park University's Conservatory of the Performing Arts in Pittsburgh, PA. During her tenure there, she studied multiple aspects of the theater craft, under the instruction of such industry giants as Tony Award Nominee Rob Ashford, Drama Desk Award Winner Jack Allison, and countless others. In addition to her studies, she also served as the Apprentice to the Marketing Director of the Conservatory from 2002 until her graduation in the spring of 2006. While at Point Park University, Kelly also served at the Conservatory's Marketing Apprentice, where she gained experience in press coordination, theatrical promotions, and news media copywriting. During her senior year, she served as the press liaison for the office of the Artistic Director of the Pittsburgh Playhouse. In the spring of 2006, Kelly graduated with a Bachelor of Arts degree in Musical Theater with a Minor in Directing.

After graduating, Kelly began putting her theatrical training to use. She began working at the Washington County Playhouse in Hagerstown, MD where she performed in over 30 productions, choreographed six productions, and directed one. Since joining the CCT family, Kelly has served as the choreographer for the STAGE Camp productions of Seussical Jr., The Little Mermaid Jr., Honk Jr. and Music Man Jr. Kelly also served as the choreographer for CCT’s productions of Roald Dahl’s Willy Wonka and Bye Bye Birdie, as Director of CCT's production of Guys & Dolls, and Nuncrackers; as well as playing the Maid in CCT's production of Dracula and Kay Banks in Father of the Bride.

Kelly spent 10 years working throughout the tri-state area is sales and marketing, most recently spending two years working for Gatehouse Media as their local Advertising Director.  Kelly currently lives in Waynesboro, PA with her husband Durand, and daughter Kensi.

Sally volunteered her time with CCT throughout the years as an actress (most recently in the 2016 production of “Beauty and the Beast”), singer, choreographer, director, set painter, costumer, stage manager, spotlight operator, producer, make-up artist, usher, ticket taker, and board member, to name a few.

An independent entertainer, she is a choir member and soloist at First Lutheran Church in Chambersburg. Sally has been a singer with the Mercersburg Community Chorus and has toured numerous countries in Europe and Australia with the Juniata College Alumni Choir. She formerly worked for Easter Seals for 15 years as a “Kids on the Block” puppeteer, teaching area elementary children about disability awareness.

A native of Chambersburg, a graduate of CASHS and Juniata College, she now lives in Shippensburg, Pennsylvania.